Below please find the information for Quality Guru - Dr. Kaoru Ishikawa for your information and reading pleasure. Enjoy! 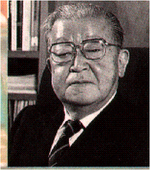 Kaoru Ishikawa (石川 馨, Ishikawa Kaoru, July 13, 1915 - April 16, 1989) was a Japanese university professor and influential quality management innovator best known in North America for the Ishikawa or cause and effect diagram (also known as fishbone diagram) that is used in the analysis of industrial process.

Born in Tokyo, the oldest of the eight sons of Ichiro Ishikawa. In 1939 he graduated University of Tokyo with an engineering degree in applied chemistry. His first job was as a naval technical officer (1939-1941) then moved on to work at the Nissan Liquid Fuel Company until 1947. Ishikawa would now start his career as an associate professor at the University of Tokyo. He then undertook the presidency of the Musashi Institute of Technology in 1978.

In 1949, Ishikawa joined the Japanese Union of Scientists and Engineers (JUSE) quality control research group. After World War II Japan looked to transform its industrial sector, which in North America was then still perceived as a producer of cheap wind-up toys and poor quality cameras. It was his skill at mobilizing large groups of people towards a specific common goal that was largely responsible for Japan's quality-improvement initiatives. He translated, integrated and expanded the management concepts of W. Edwards Deming and Joseph M. Juran into the Japanese system.

After becoming a full professor in the Faculty of Engineering at The University of Tokyo (1960) Ishikawa introduced the concept of quality circles (1962) in conjunction with JUSE. This concept began as an experiment to see what effect the "leading hand" (Gemba-cho) could have on quality. It was a natural extension of these forms of training to all levels of an organization (the top and middle managers having already been trained). Although many companies were invited to participate, only one company at the time, Nippon Telephone & Telegraph, accepted. Quality circles would soon become very popular and form an important link in a company's Total Quality Management system. Ishikawa would write two books on quality circles (QC Circle Koryo and How to Operate QC Circle Activities).

Among his efforts to promote quality were the Annual Quality Control Conference for Top Management (1963) and several books on quality control (the Guide to Quality Control was translated into English). He was the chairman of the editorial board of the monthly Statistical Quality Control. Ishikawa was involved in international standardization activities.
1982 saw the development of the Ishikawa diagram which is used to determine root causes.
At Ishikawa's 1989 death, Juran delivered this eulogy:

he worked for toyota