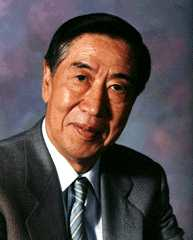 Genichi Taguchi (Born January 1, 1924, in Tokamachi) is an engineer and statistician. From the 1950s onwards, Taguchi developed a methodology for applying statistics to improve the quality of manufactured goods. Taguchi methods have been controversial among some conventional Western statisticians, but others have accepted many of the concepts introduced by him as valid extensions to the body of knowledge.
Biography


Taguchi was raised in the textile town of Tokamachi, in the Niigata prefecture of Japan. He initially studied textile engineering at Kiryu Technical College with the intention of entering the family kimono business. However, with the escalation of World War II in 1942, he was drafted into the Astronomical Department of the Navigation Institute of the Imperial Japanese Navy.
After the war, in 1948 he joined the Ministry of Public Health and Welfare, where he came under the influence of eminent statistician Matosaburo Masuyama, who kindled his interest in the design of experiments. He also worked at the Institute of Statistical Mathematics during this time, and supported experimental work on the production of penicillin at Morinaga Pharmaceuticals, a Morinaga Seika company.
In 1950, he joined the Electrical Communications Laboratory (ECL) of the Nippon Telegraph and Telephone Corporation just as statistical quality control was beginning to become popular in Japan, under the influence of W. Edwards Deming and the Japanese Union of Scientists and Engineers. ECL was engaged in a rivalry with Bell Labs to develop cross bar and telephone switching systems, and Taguchi spent his twelve years there in developing methods for enhancing quality and reliability. Even at this point, he was beginning to consult widely in Japanese industry, with Toyota being an early adopter of his ideas.
During the 1950s, he collaborated widely and in 1954-1955 was visiting professor at the Indian Statistical Institute, where he worked with C. R. Rao, Ronald Fisher and Walter A. Shewhart. While working at the SQC Unit of ISI, he was introduced to the orthogonal arrays invented by C. R. Rao - a topic which was to be instrumental in enabling him to develop the foundation blocks of what is now known as Taguchi methods.
On completing his doctorate at Kyushu University in 1962,  he left ECL, though he maintained a consulting relationship. In the same year he visited Princeton University under the sponsorship of John Tukey, who arranged a spell at Bell Labs, his old ECL rivals. In 1964 he became professor of engineering at Aoyama Gakuin University, Tokyo.  In 1966 he began a collaboration with Yuin Wu, who later emigrated to the U.S. and, in 1980, invited Taguchi to lecture. During his visit there, Taguchi himself financed a return to Bell Labs, where his initial teaching had made little enduring impact. This second visit began a collaboration with Madhav Phadke and a growing enthusiasm for his methodology in Bell Labs and elsewhere, including Ford Motor Company, Boeing, Xerox and ITT.
Since 1982, Genichi Taguchi has been an advisor to the Japanese Standards Institute and executive director of the American Supplier Institute, an international consulting organisation.  His concepts pertaining to experimental design, the loss function, robust design, and the reduction of variation have influenced fields beyond product design and manufacturing, such as sales process engineering.

Main article: Taguchi methods
Taguchi has made a very influential contribution to industrial statistics. Key elements of his quality philosophy include the following: