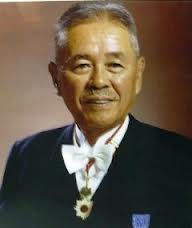 Please find below the useful information about Taiichi Ohno, the Quality Guru that close to Dr. Shigeo Shingo. Happy reading!

Taiichi Ohno (大野 耐一 Ōno Taiichi, February 29, 1912 – May 28, 1990) was a prominent Japanese businessman. He is considered to be the father of the Toyota Production System, which became Lean Manufacturing in the U.S. He devised the seven wastes (or muda in Japanese) as part of this system. He wrote several books about the system, including Toyota Production System: Beyond Large-Scale Production. Born in 1912 in Dalian, China, and a graduate of the Nagoya Technical High School (Japan), he joined the Toyoda family's Toyoda Spinning upon graduation in 1932 during the Great Depression thanks to the relations of his father to Kiichiro Toyoda, the son of Toyota's founding father Sakichi Toyoda.  He moved to the Toyota motor company in 1943, and gradually rose through the ranks to become an executive. In what is considered to be a slight, possibly because he spoke publicly about the production system, he was denied the normal executive track and was sent instead to consult with suppliers in his later career.

Ohno's principles influenced areas outside of manufacturing, and have been extended into the service arena. For example, the field of sales process engineering has shown how the concept of Just In Time (JIT) can improve sales, marketing, and customer service processes.